In other words, they know how to generate cash on demand.

You and I, the business owners are the Rainmakers of our businesses. Whether we like it or not. 😊

You will start off taking baby steps. Embracing your Rainmaker Role is the first. And then you’ll move forward at your own pace in the direction that best suits your situation.

Because you're here, it’s highly likely that you are “so over” the stress and anxiety caused by being the best-kept secret in your field, that you’re seriously committed to embracing your role as Rainmaker so that you can start working on becoming the Go-To Expert in your field.

Good call, because once you’ve made that decision, your whole world changes.

It’s no secret. The success of any goal - big or small - in work or in life - is paid for in advance with how well you’ve planned the goal. And with the mental models (decision-making frameworks) that you've used for your planning.

If you fail to plan, you plan to fail.

Most business owners will nod in agreement with that statement. Yet most of them don't do any formal business planning at all.

They either prefer flying by the seat of their pants. Wandering around aimlessly. Or, they use outdated goal and project planning models that can't withstand the challenges of doing business in 2022.

Fortunately, there is a simple solution. It's a synthesis of three mental models that have stood the test of time.

#1: Turn Your BIG goals into PROJECTS

To best way to turn a big hairy audacious wish (goal) - like becoming the preeminent Go-To Expert in your field - into a win is to turn it into a PROJECT.

Claire Emerson from People Loves Projects fame, says that a well-built project is what every good goal should look like (but often fails to be).

But best of all says, Claire...

In other words, projects don't make us feel like losers before we even begin.

#2: Use A STEPPING STONE Model To Plot Your Milestones

To turn a big hairy audacious project with many unknowns and variables into a sure win, a stepping stone model works better than a conventional linear goal model.

Putting it another way, when stepping OUT of your comfort zone, use a stepping stone model to move towards your end goal.

Researchers Kenneth Stanley and Joel Lehman have found that the linear milestone model for reaching a goal is effective when the steps between where you are now and where you want to go are clear, and there are not many unknowns and variables.

For example, it still makes sense to reach goals like losing 10 pounds, getting 8 hours of sleep per night, and spending more time with your family, with linear milestones.

However, when the steps between where you are now and where you want to go are numerous and unclear, Stanley and Lehman have found that a stepping stone model works better.

To accomplish a BIG goal you've never tried before, you do NOT reverse-engineer milestones. Rather, you follow the stepping stones immediately in front of you that give you the most novel paths forward. Even if you aren’t sure exactly how that stepping stones will pay off in the future.

Then, from that new stepping stones, you look for the most novel path forward again. And so on, jumping from one novel stepping stone to another.

#3: Tap Into The Power Of STORYTELLING

The mind’s natural language is stories.

Facts, figures and assertions are not our mind’s natural language. They are hard for us to assimilate because they are generally not in a sequence that starts us predicting.

Stories unreel in a sequence and prompt us to predict what will happen next. So stories are a low-energy, low-effort way to pass on experiences and information.

We've been conditioned to believe that business is all about facts. It's not. It's mostly guesses and assumptions.

Barry Schwartz, the author of The Paradox of Choice: Why More Is Less (New York: Echo, 2004), wrote

“There’s a point where all of this choice starts to be not only unproductive, but counterproductive - a source of pain, regret, worry about missed opportunities, and unrealistically high expectations.”

The ocean of choice is only getting bigger, and we need the life preserver of meaningful stories more than ever.

The simple Rainmaker Quest Model that you’re about to build, synthesizes all three of the above-mentioned models into one.

It's designed to help you with the critical first part of any project - defining the scope (strategy) of the project - in a way that facilitates the building of your tactical stepping stone plan, which in turn facilitates quick and efficient implementation.

And it does it in a fun, playful, and meaningful way

Think of your Rainmaker Quest Model as a minimum viable project scope.

Or, if you are familiar with the Pareto Principle, think of it as a Pareto Project Scope. The 20% of strategy that gets 80% of the job done.

It’s a model you can use to skyrocket the success of any big goal. In business and in life.

So, what are you waiting for ...? Hit that Start Step 2 button and let’s get cracking on your Quest Model. 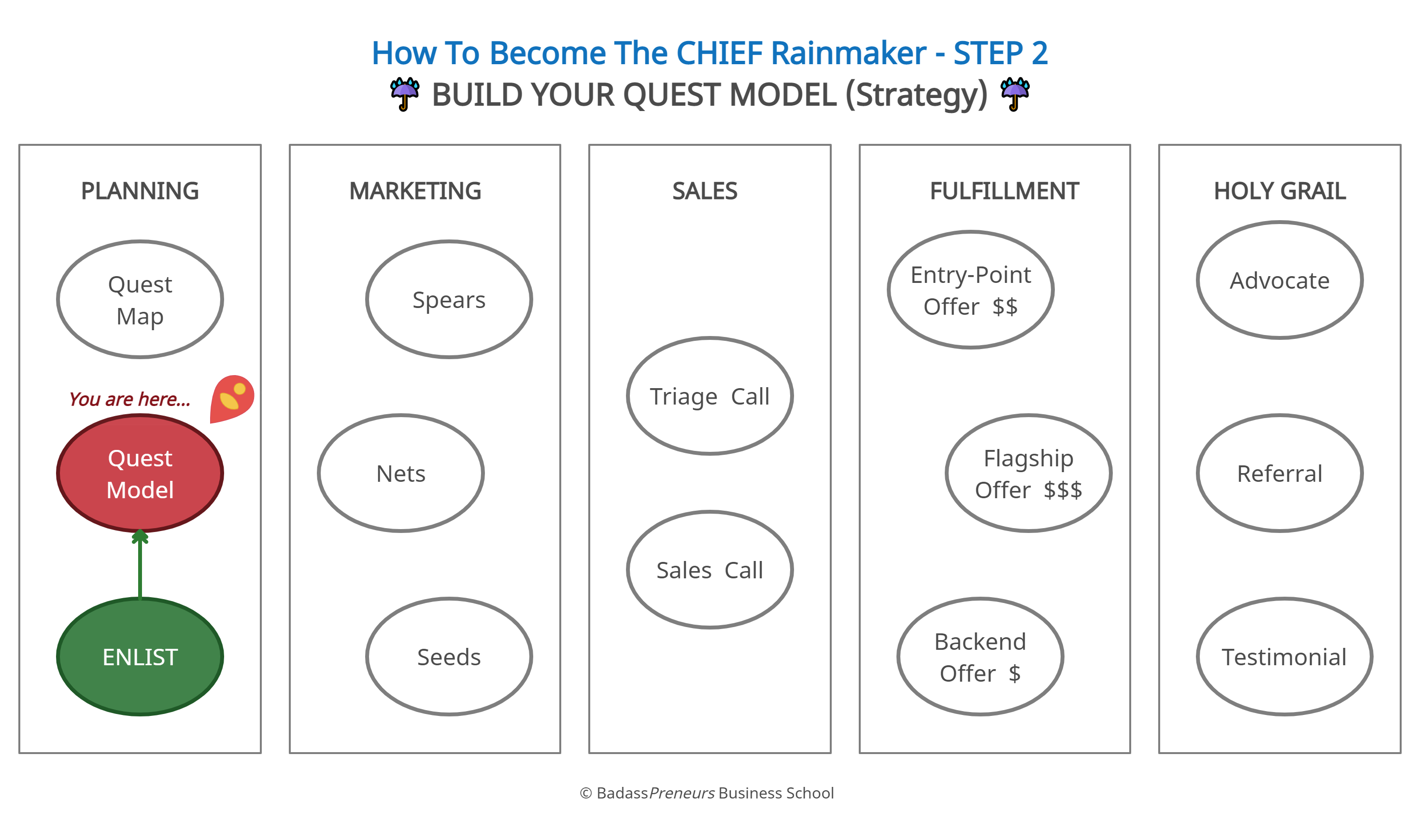 How To Build A Badass Rainmaker Quest Model

6 lessons
1 If You Fail To Plan, You Plan To Fail 2 Element #1: The Holy Grail 3 Element #2: Characters 4 Element #3: The Plot 5 What's Next 6 Bonus Extra Credits
Unlock module
Modules for this training resource 1

How To Build A Badass Rainmaker Quest Model

Enter your email address and we will send you a link to reset your password.